In Lapland there are not 4 but 8 different seasons.

The Northern Lights Ranch in Levi (Kittila) sells our winter scenery artworks; on this page you find out the story behind each season.
Enjoy your stay with us! 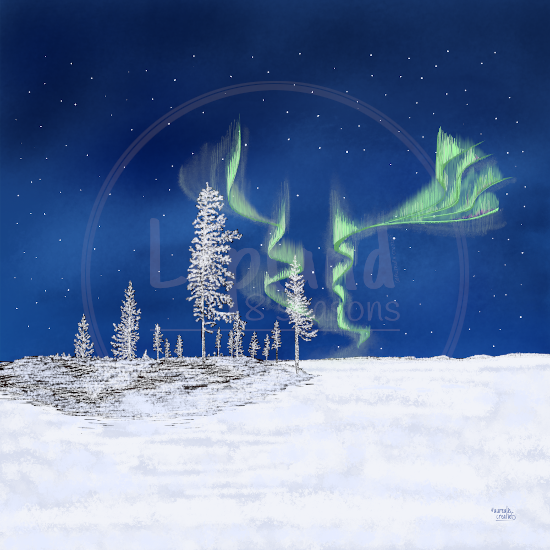 The 1st season - Frosty winter - is between Winter and Spring, or the months of January and February.
The days are short in southern Lapland but still non-existent in the north, the passage of time is marked by the moon and the glow of Polar Night at midday.

You will be treated to a lot of snow, snow comes heaviest this time of year and really freezing temperatures, it can get really cold with temperatures of -20°C during the day – turning innocuous pines into fantastic snow creatures and at clear nights you can enjoy mighty beautiful northern lights too. 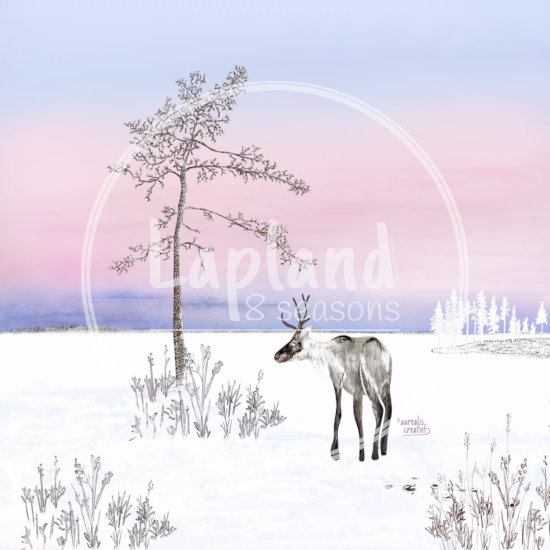 Millions of ice crystals glistening in the sun, with mild temperatures in the pristine nature of Lapland.

The second season is spring. Spring is characterised by an unbreakable snow crust on which, you can walk with snowshoes. In 2020, you could stand on up to 1.20 metres of snow, a wonderfully thick crust! But as soon as the sun shines, which already gives a bit of warmth, a crack sometimes appears!

March and April are the ideal months to enjoy shiny snow, millions of ice crystals glistening in the sun, with mild temperatures in the pristine nature of Lapland. 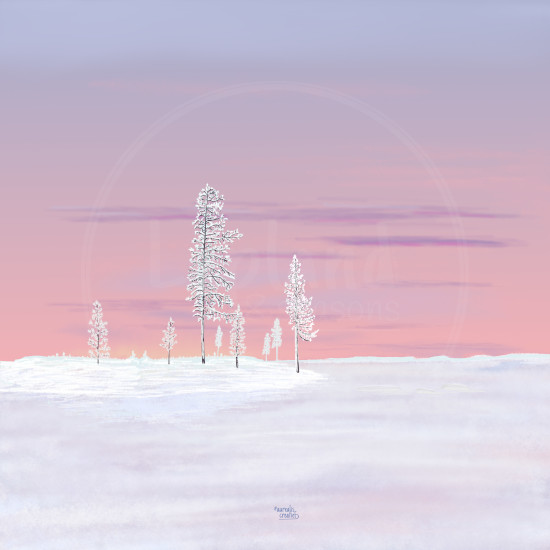 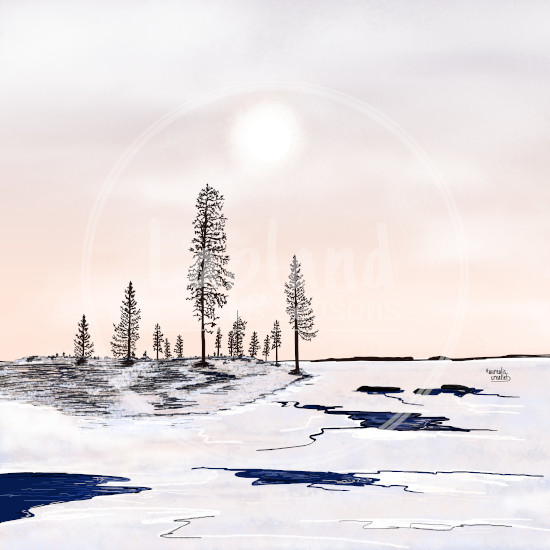 All that sunlight across Lapland, the rivers awaken. The silence is over! Because of the large amount of ice and snow, it takes more than a month for the ice to disappear completely. May is therefore the intermediate season, between spring and summer!

The intermediate season (May), called 'Melting Ice', is also special. All that sunlight and warmth finally penetrates the heavy snow during late spring, cracking the ice and sending it crashing down the rivers. Across Lapland, the rivers writhe and awaken, bursting from their winter slumber like the giants they are. There are no more ice roads, no snowmobile excursions across serene frozen surfaces. This is the first glimpse of summer to come, and a great time to enjoy the first ice cream cone of the season.

The large quantity of snow and ice melts visibly, faster and faster, the first wet spots on the frozen river appear, where there are rapids the undulating water is already very visible, and you can hear the river flow again where it was otherwise completely silent under a thick layer of ice! The silence is over, the babbling river is back. 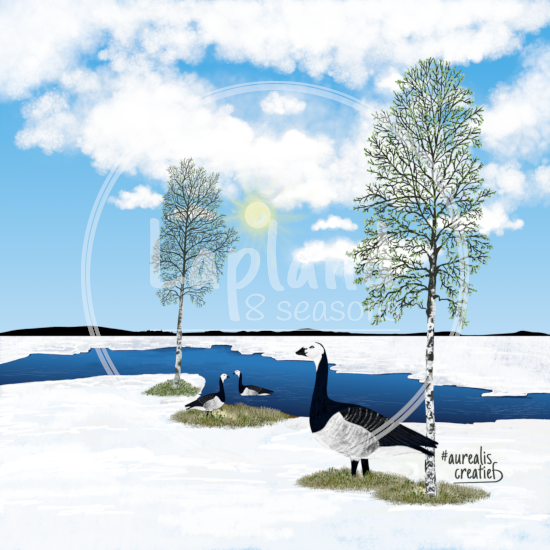 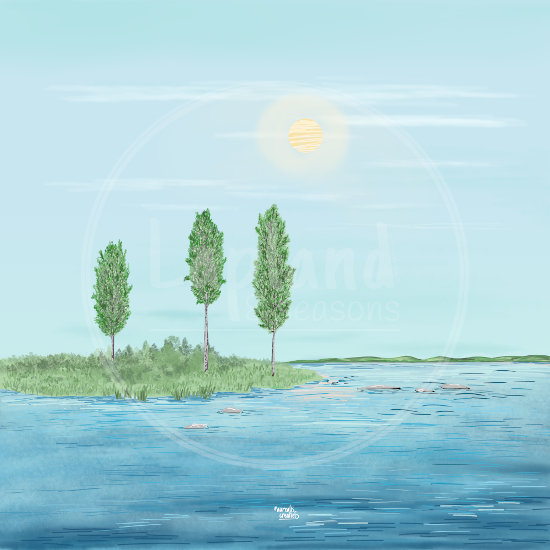 Summer - The unending days of summer

Sometime in mid-May, the sun dips below the horizon for the last time in months, 24 hours of light: "nightless nights".

Summer is no longer coming, it’s here!  June and July are the two warmest months of the year, with an average temperature of 10 to 16°C. The sun remains constantly above the horizon, making for what people call "nightless nights".

On Midsummer's Day, 21 June, the sun is at its highest. The further north you go, the more nightless nights there are! For Lapland, the summer season means festivals, kayaks and paddles, mountain bikes, hiking ancient stony fells … under the Midnight Sun, everyone has more energy, more time, more life.

Every Finn enjoys the greenery, the water and the sun to the full! 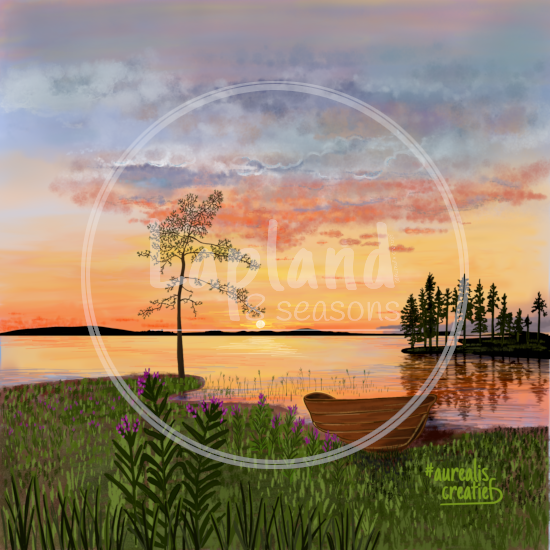 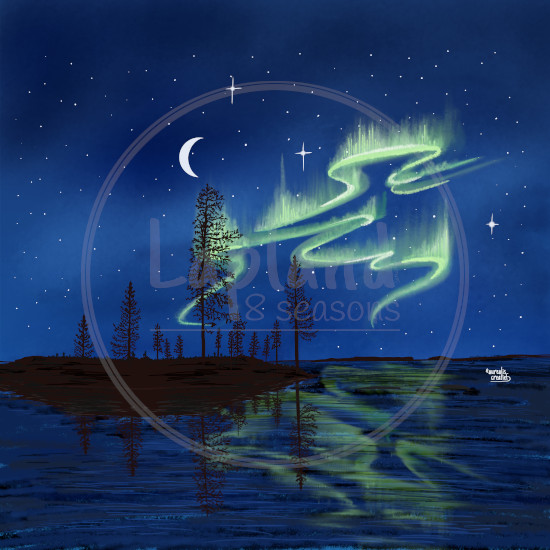 Artwork ‘The return of Lady Aurora'

The harvest month is the return of nightfall to the north and also the return of the northern lights! The season of picking the most unusual wild mushrooms and blueberries: from Nordic cranberries to other blue and red berries (lingonberry, cranberry, redberry, bilberry, …).

This season salutes the end of summer with cooler days, stars in the skies, and colors in the trees. This is the season for hiking in a national park, picking berries and mushrooms in the bogs – which does not disappoint with the most unusual wild mushrooms and blueberries: from Nordic cranberries to other blue and red berries (lingonberry, cranberry, redberry, bilberry, ...) and mushrooms.

This is the season of seeing the faint glimmer of the Northern Lights reflected in the border rivers between Finland and Sweden: a double aurora. 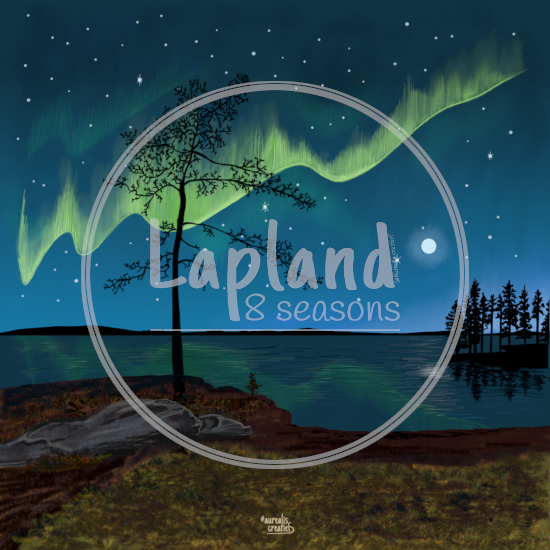 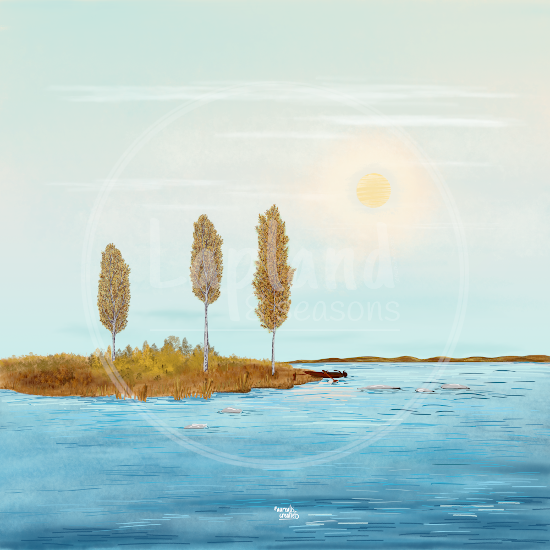 The Finns have a nice name for autumn: RUSKA. The trees begin blushing in vibrant shades of red, orange and yellow—they know they will soon be bare and in full view.

A time when it is still lovely to walk around and explore freely in the national parks, not too cold yet. However, darkness falls earlier and earlier and the first cool nights are also a fact in September. 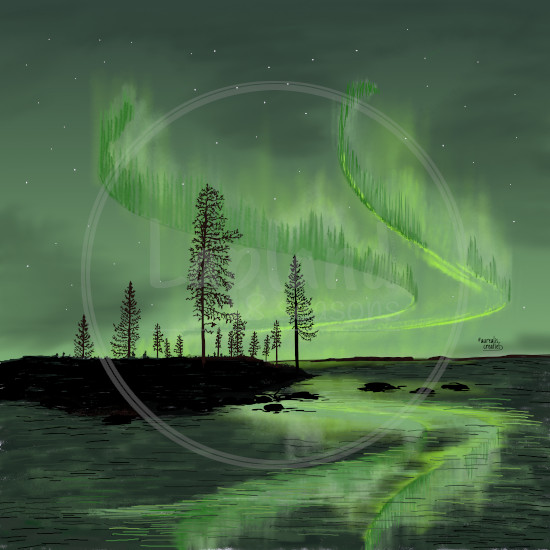 October and November are the 7th season: ' First snow'.

Winter’s first kiss: The days grow shorter, the weater more unpredictable. On the banks of a wildly flowing river, the northern lights reflect in the water surface, the nights are still very dark because there is no snow yet. Truly magical!

The first snowflakes fall at the beginning of November, snowflakes often fall without warning, but it can still melt away, but with the next cold, new snow falls and forms the first layer for the coming winter! On some days - at the end of November - there can already be 20 cm of snow and the lake freezes over ...

Christmas carols begin wriggling in people’s ears, and there can be no doubt that winter, in all her glory, is on her way. 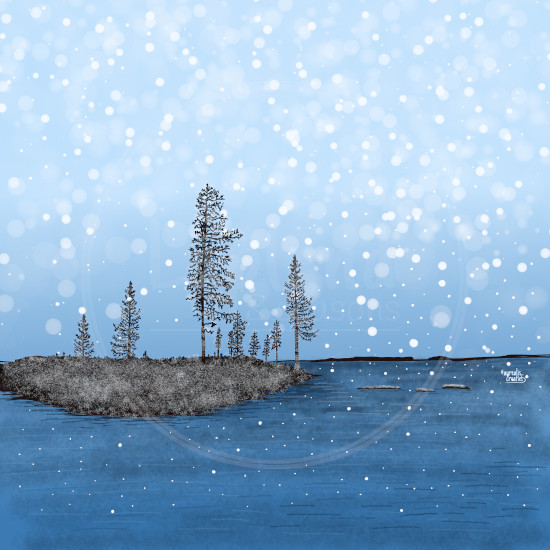 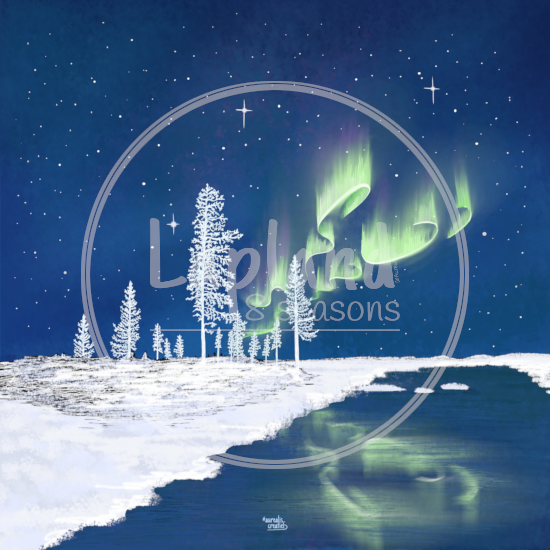 Winter is the darkest time of the year. The sun never rises above the horizon, which means only a few hours of light each day. We have a Finnish word to denote the dark period of twilight: Kaamos.

Winter is the darkest time of the year. The sun never rises above the horizon, which means only a few hours of light each day. 200 km above the Arctic Circle, there is a short period of light between 10 a.m. and 4 p.m. After 4 p.m., darkness falls and it is time for a warm sauna and a cosy fire! Until ... the northern lights call you outside.

Apart from the longest night of the year (21 December - winter solstice), this is also the cosiness of Christmas. Atmosphere and cosiness, a good time to visit Father Christmas, in Rovaniemi. Rovaniemi lies almost on the Arctic Circle, 66°30'10, where the number of days of darkness is limited, because the further north you go, the more dark days you have and the longer you have to wait for the first sunrise!

The name of this Artwork is 'Sub-Zero Winter', it was launched in December 2021 at -30°C in Tepasto, Finland, therefore the name 'Sub-Zero Winter'.  Tepasto is a little vilage, 10 km away from The Ranch, in the middle of the wilderness, without lightpolution.

Our artworks are also ONLINE for sale in our e-Shop 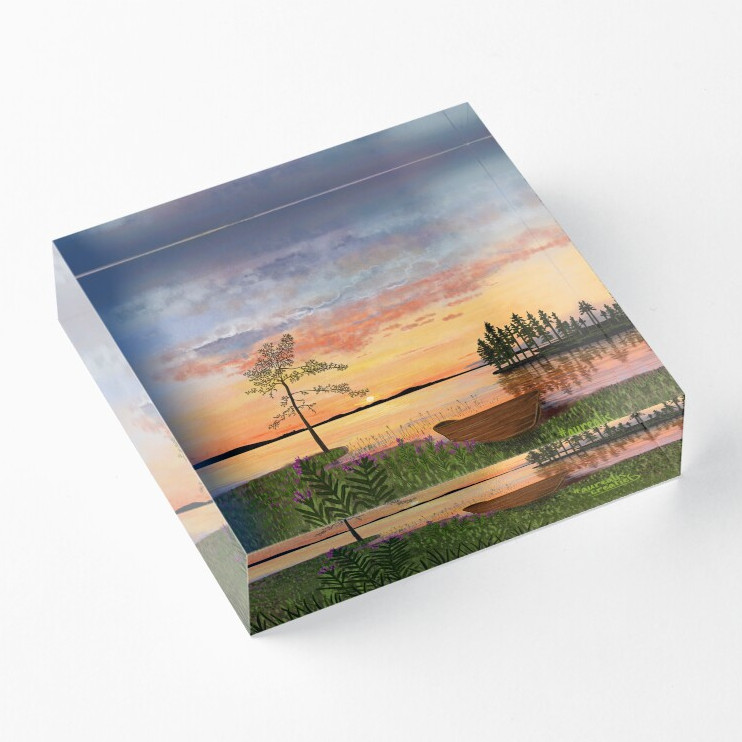 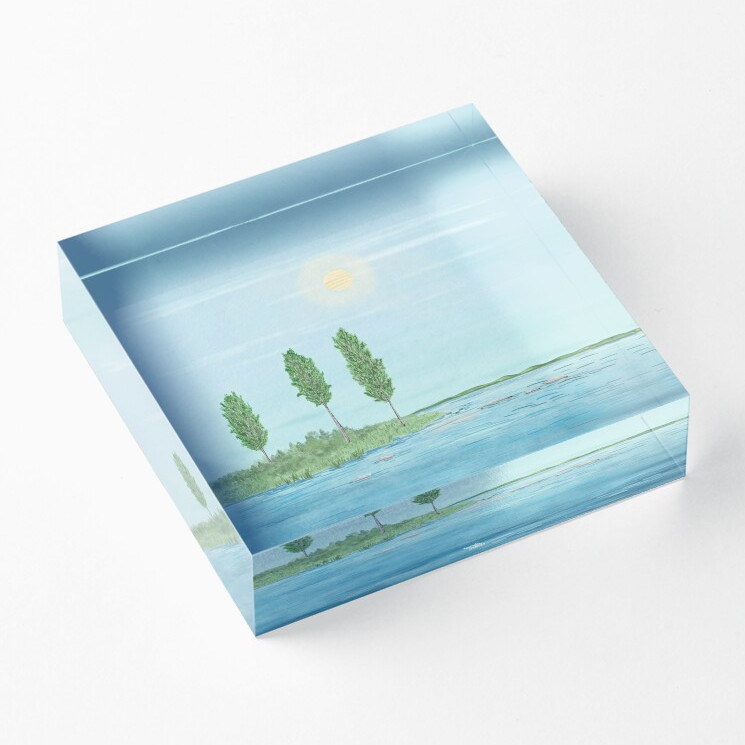 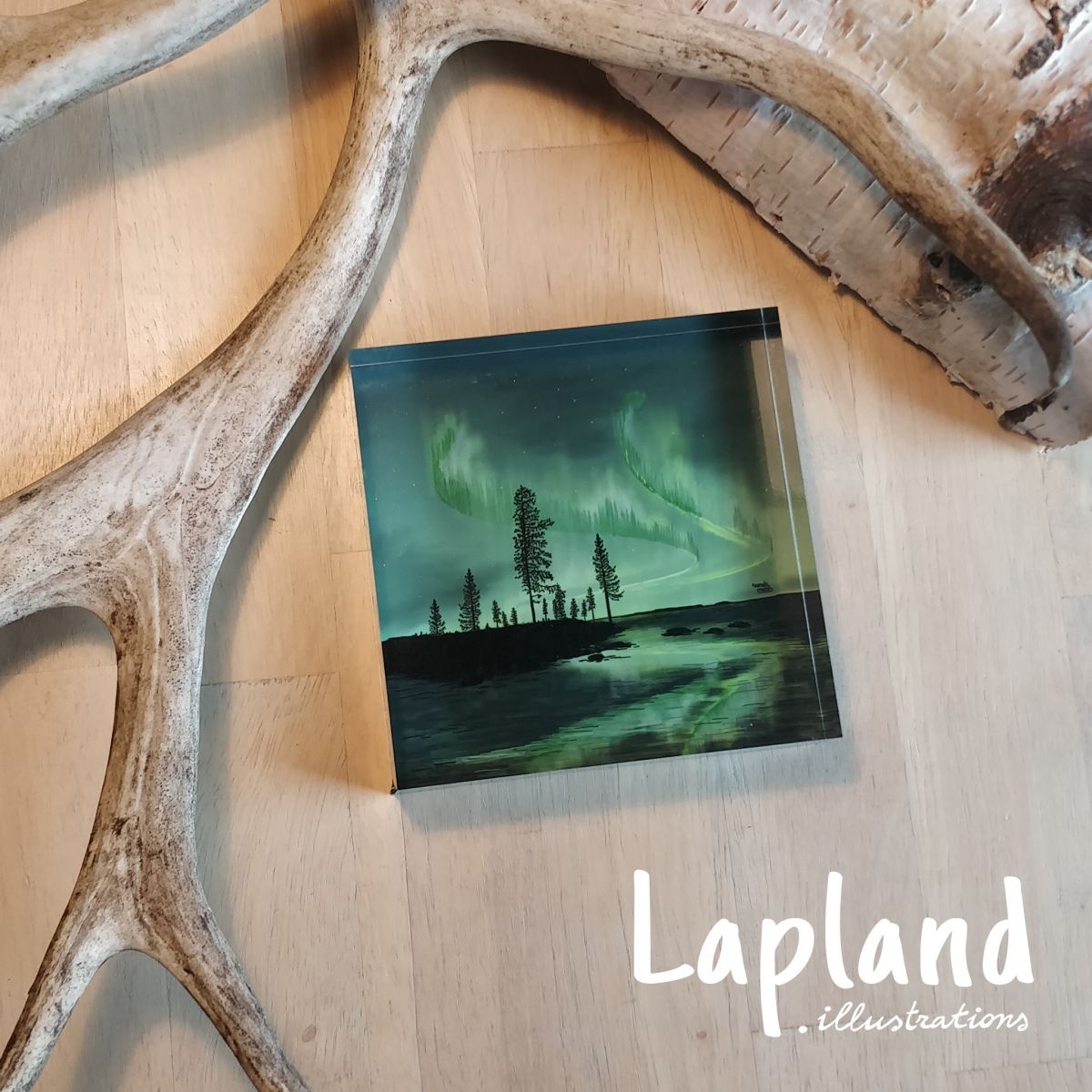 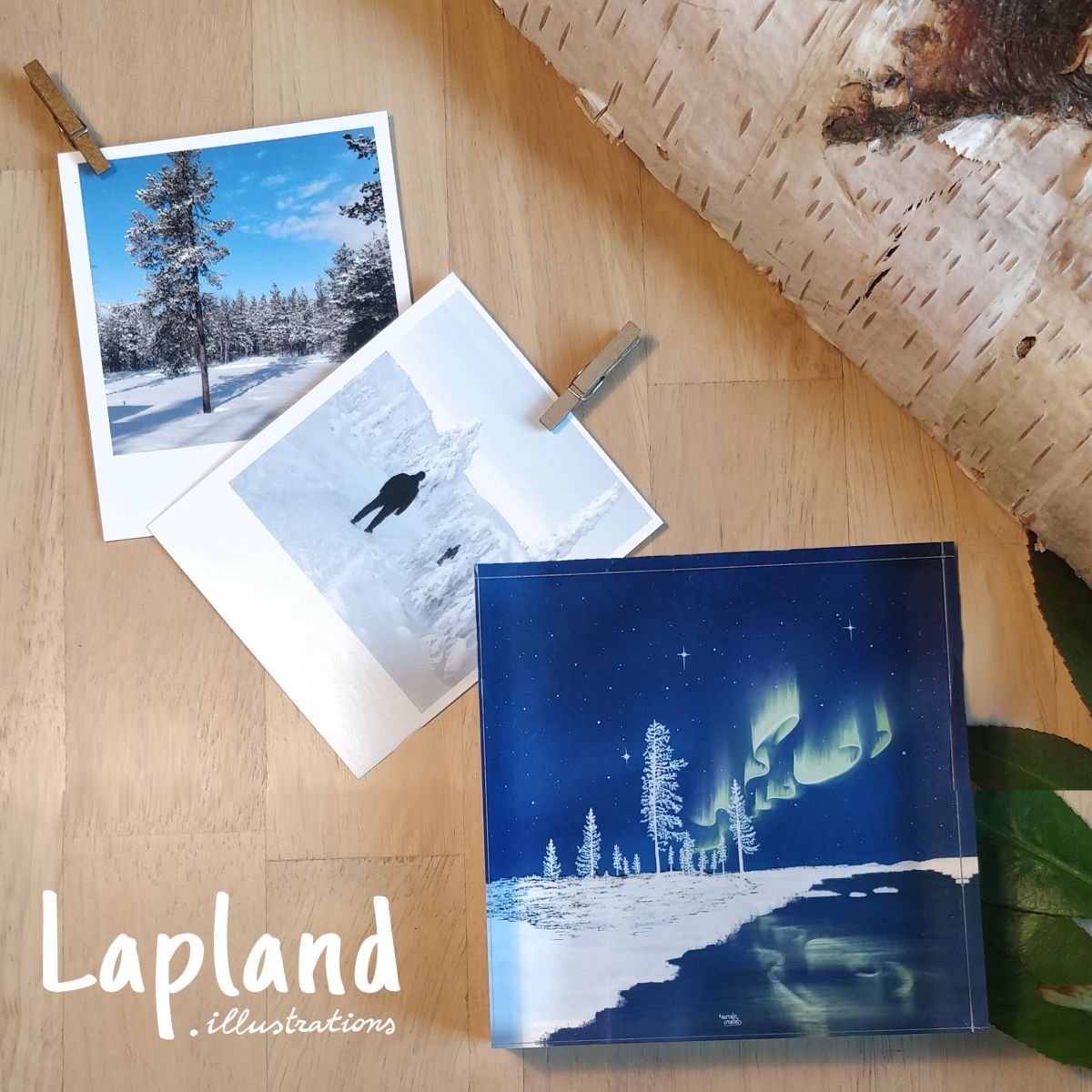 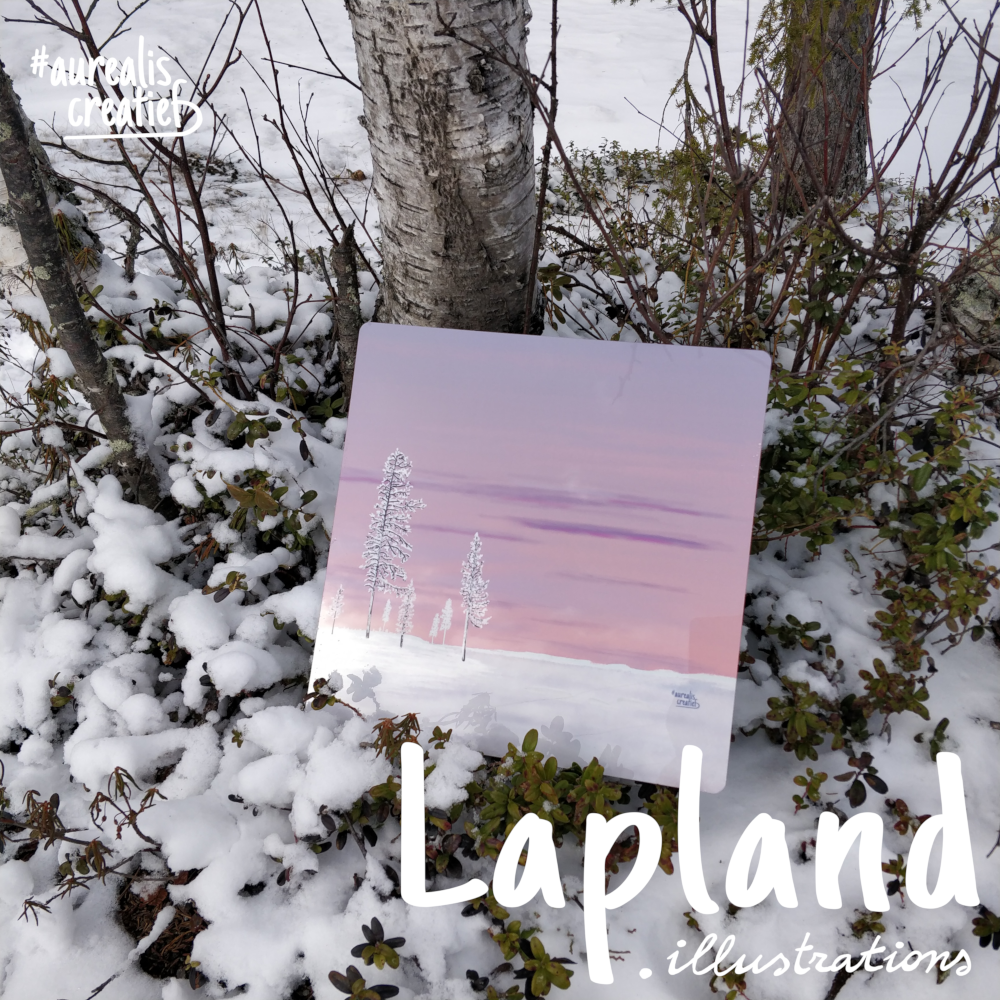 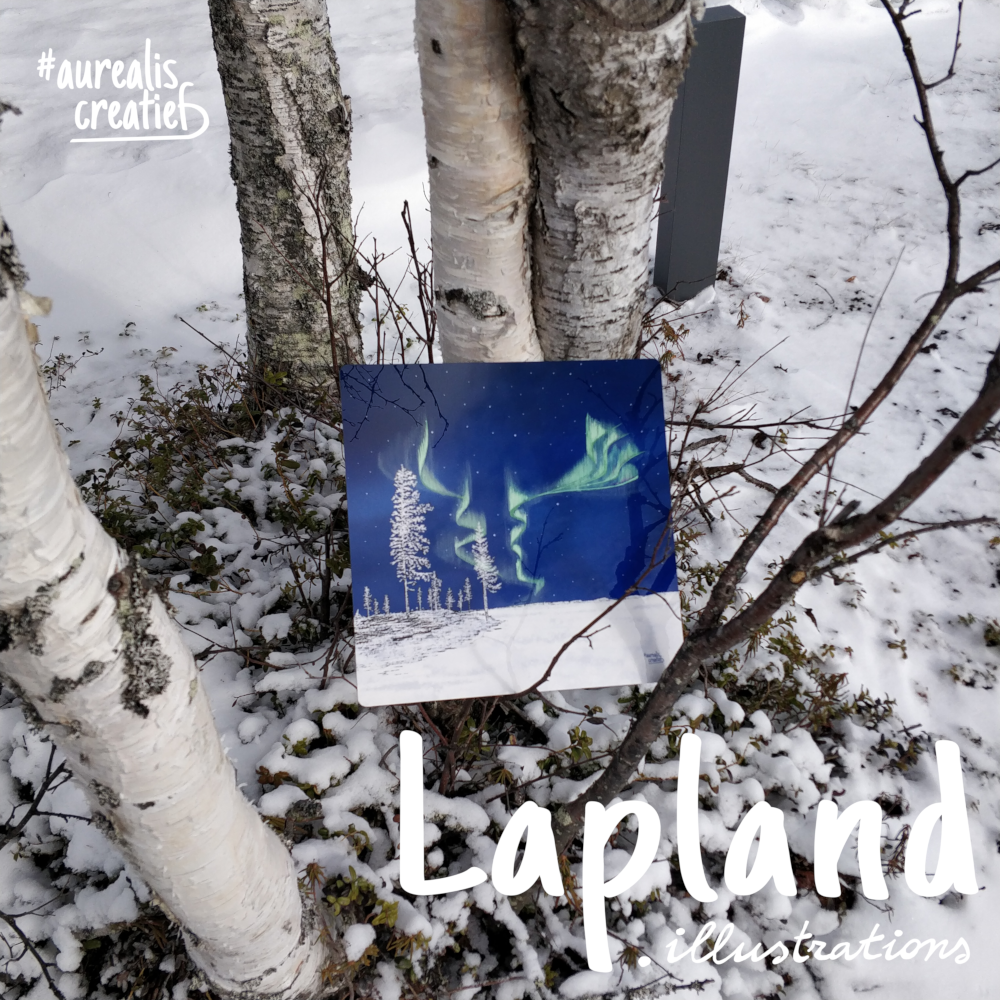 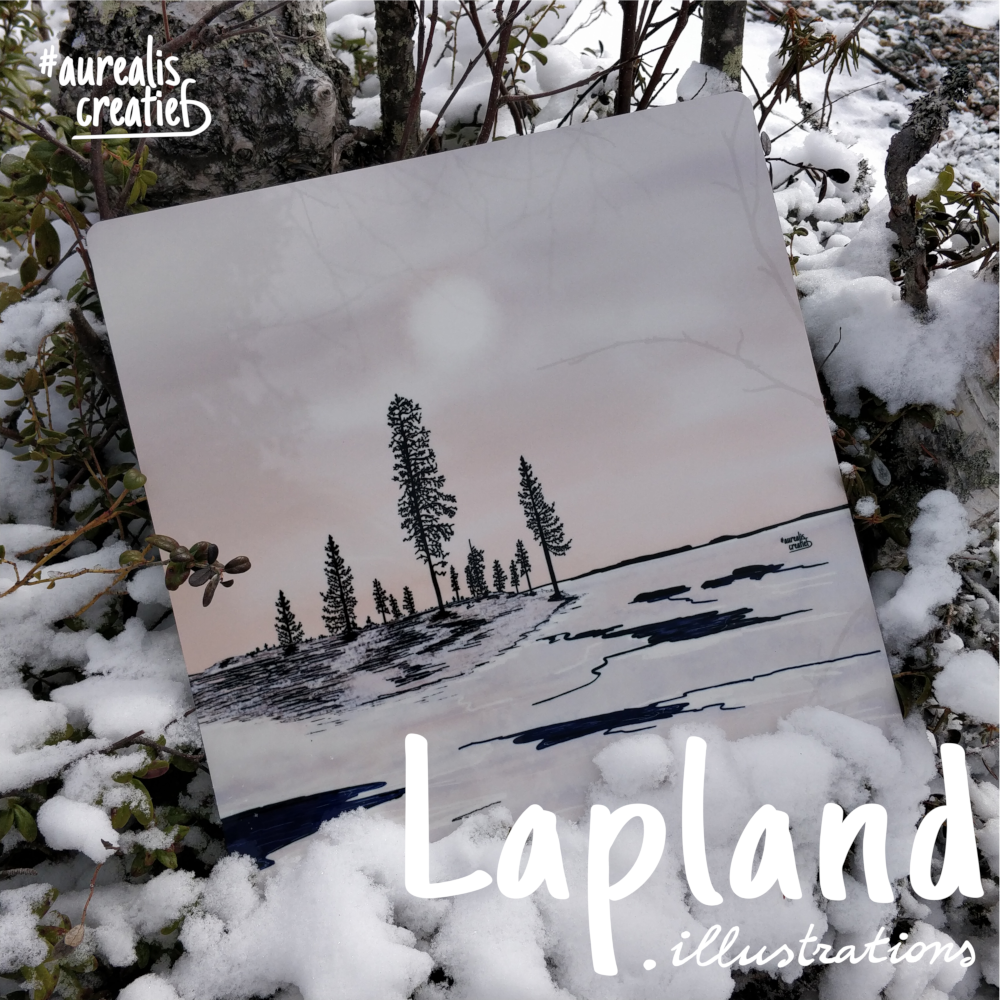 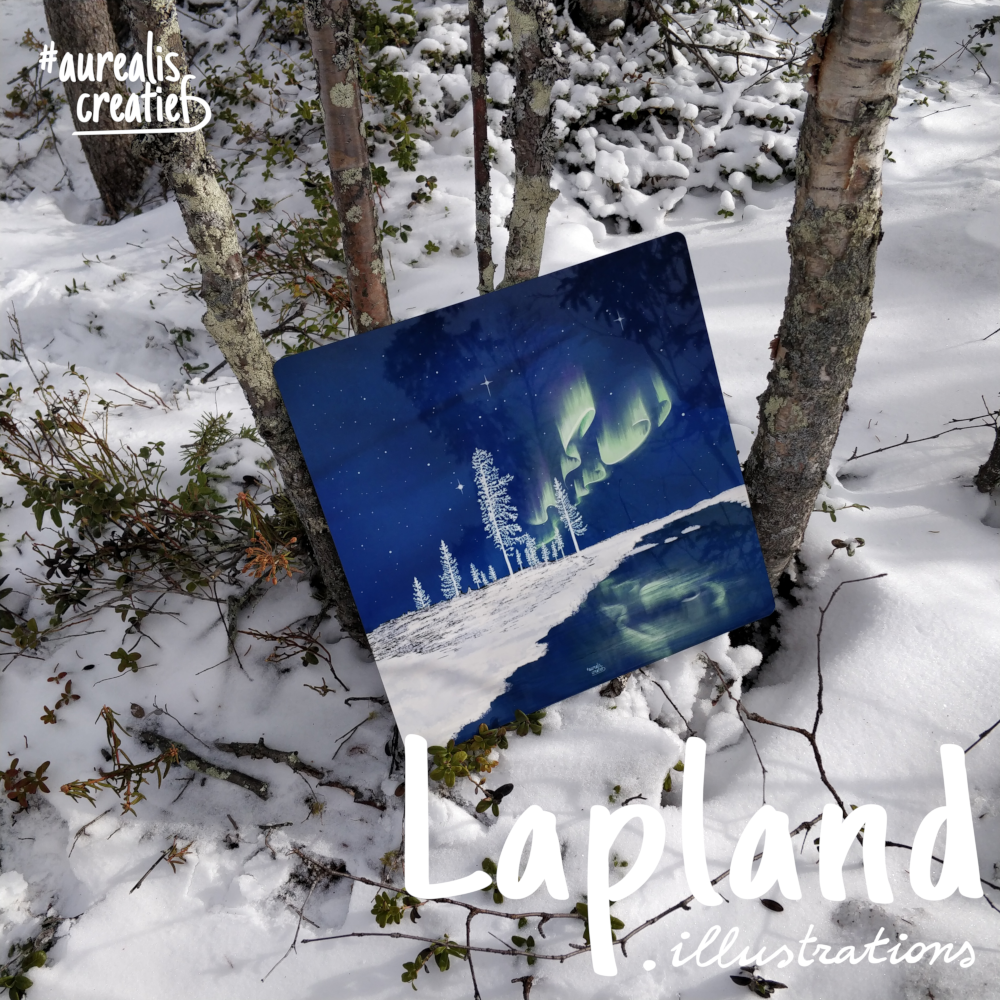